A Review of Teju Cole’s “Open City” by @Nkay9 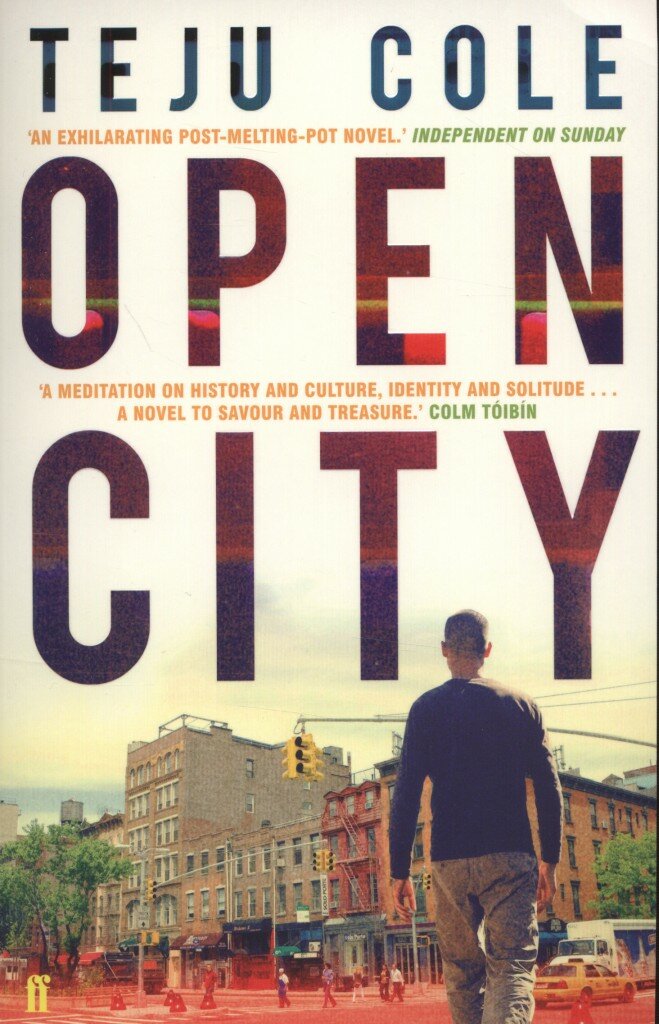 In the fourth of his “Eight letters to a young writer” serialized essays, Teju Cole talks of inwardness in literary voice. He differentiates between genre writing which primarily serves to entertain the reader and is promiscuous in a sense; and more serious writing which exerts a certain influence, makes a pact with, and earns the loyalty of the reader. This is writing that stays with you. Cole’s second novel “Open City” is a fine study in exactly this kind of compelling literary voice. “Open City” is like a jealous lover who you find impossible to stay with but who you connect with at a primal level and can’t leave. It’s a narrative that speaks to the visceral human condition; the callousness we all have but which we keep wrapped under various degrees of social falsity.

“Open City” is the story (and I use the word ‘story’ loosely) of Julius, a Nigerian-born immigrant doing his residency in psychiatry in New York.  The book traces Julius’ navigation of New York during the period of this residency including a vacation spent in Brussels, Belgium in the dead of winter.  As far as protagonists go, Julius is as unlikeable as they come. I’m not clear on the rules of fiction, but from my modest literary experience, it seems that there’s an unspoken pact among writers to keep their protagonists lovable as a counterpoint to the oft-present antagonist who the reader is directed to hate. Even in cases where the protagonists have glaring flaws, many a writer will provide a chance for redemption as Khaled Hosseini does for Amir in Kite Runner. Julius, on the other hand, is a character who irritates precisely because he mirrors the stubborn immutability of the human condition. There are no profound moments of saving epiphany; all you find is a collection of moments and memories that Cole piles on bit by bit to form the collectiveness of Julius’ experiences. Julius represents exactly how so many of us deal with our formative experiences; by covering them up and pretending that they’ll go away; while obsessively dredging them up into the conscious at the most inopportune of moments. You get a sense of this in the poignant longing he carries around for his German “oma” (grandmother) and the (connected) almost unapologetic resentment towards his estranged mother.

“Open City” does not pretend to limit Julius to one thematic experience that is supposed to shape his entire world view. Instead, in a deceptively casual fashion, Cole displays a three-dimensional view of the world that Julius lives in; a world where Arab immigrants live with almost as much terror as the governments trying to keep them out of their territories harbour; a world where colourism means that a half-caste in African society is automatically privileged;  a world where queer old professors die alone in their apartments; a world where young black men skulk in the shadows and beat people senseless for a wallet and perhaps a chance to transform rage into action; a world where the effects of the Holocaust and World War II still haunt successive generations; a world where Colonial Collapse Disorder among the bee population is cause for concern in the news; and a world where xenophobia still exists in a Belgian society thought to be largely tolerant by the people it privileges. Cole presents to us Nigeria, Germany, Morocco, the United States and Belgium and the multiculturalism that pervades these countries and their people. The characters are opinionated in a manner that seems to simultaneously intrigue and tire Julius and reinforce something that he says in the beginning chapters: “There was a mood in the society that pushed people more toward snap judgement and unexamined opinions; to the old problem of mass innumeracy, it seemed to me was being added a more general inability to assess evidence.”

Cole’s attention to painstaking detail leaves us with vivid images of the streets of New York, the architectural wonders of Brussels as well as the idyll of middle-class suburbia in Nigeria. There’s a lot of history to be gleaned in the book, in relation to both ancient and modern cities; sculptures, art and music. The book derives its title from the declaration that Belgian rulers made during World War II, pronouncing Brussels an open city during World War II and effectively saving it from the bombardment that had reduced cities like Dresden to rubble. Literature enthusiasts could take it further and trace Julius’ life as an open city, allowing different, multicultural experiences to float through him and shape him; without letting them destroy him in the process.

Of note is the author’s frequently professed enthusiasm for classical music and especially, for Gustav Mahler, which is projected onto Julius who is adept at using classical music lens to examine otherwise mundane subjects. In fact, I dare say Julius exhibits more passion for classical music than for the women in his life who seem to be fleeting distractions rather than the channels for unbridled affection we so often see in novels. However, this seems to be a façade and just when you have given up on him, he reveals a flash of emotion or altruism that you realize is buried under complex layers of indifference and apathy. Cole has fashioned a protagonist who expertly wears the cloak of indifference and gets on with the business of living, thinking and observing without stopping too often to engage in the tedium of self-psychoanalysis.

The moment you stop looking for a coherent, racy plotline in “Open City” is the moment you settle down to enjoy it. It’s less plot and more diary of experiences and memories that form Julius’ inward-turned perceptions and thought processes. It’s a difficult book to read and enjoy but it’s worth its weight in gold; in the way that climbing a mountain and getting to its ice-capped peaks would be difficult but rewarding and priceless.  I definitely recommend it.

Nkatha Obungu is a closet idealist who speaks legalese by day and masquerades as a writer by night. She is currently worshipping at the feet of Audre Lorde and Paul Verlaine. She blogs here